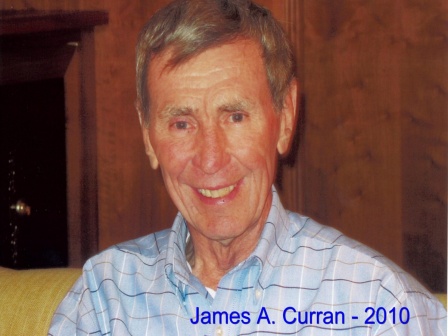 Read about the History of the Ancient Order of Hibernians

A Wherehouse? Curator to be Honored

The Ancient Order of Hibernians of Hampden/Hampshire Counties, founded in Holyoke in 1872, has named their Division: “The James A. Curran Division One” after longtime member and owner of The Wherehouse? Banquet Hall (formerly the Hampden Mills Warehouse).  A Reception was held to honor James A. Curran at The Wherehouse? in Holyoke, Massachusetts on Saturday November 20, 2010.

A most humble man of many accolades, Curran is also a man of few words except when talking about his Wherehouse?  When asked about an item in The Wherehouse? he brightens up, and readily jumps into his role as the Curator and often takes interested parties on 2-hour tours of the establishment.  If one asks him about his “Museum”, he would be the first to tell you that it is not a “Museum”, it is a Wherehouse?  There is a framed quote from Abraham Lincoln on the third floor of The Wherehouse? that best describes the Curator:

The Wherehouse? is home to many artifacts of the Industrial Age and the Early Immigrant experience.  In fact there are pictures of men, many of whom were of Irish descent, working on the Holyoke Dam and the canals.  There is the original cart that brought in cobblestones to build the Dam on display.  The Emerald Room, in The Wherehouse?, is a Gallery of the Who’s Who  from the Holyoke St Patrick’s Parade and the John F. Kennedy National Award Winners.

The Ancient Order of Hibernians felt that Curran was most deserving because he steadfastly lived by the Hibernian Motto of “Friendship, Unity, and True Christian Charity.”  We further honor him for his preservation efforts of the Irish Culture and the AOH.  He provided the guidance and leadership to sustain the AOH as a credible and viable cultural organization in the Western Mass area.  Jim has the original charters of the Ancient Order of Hibernians in Holyoke (1880) and the LAOH (1897) on display.  He would host steak roasts at his home, build floats, and organize Communion Breakfasts with his committee comprised of the late Dr. John J. Driscoll, Mike Moran, and John F. Kennedy (The Banker).

As for the local history of the AOH, around the turn of the century, as Holyoke grew into a prominent Industrial City, the number of Immigrants from Ireland increased greatly.  To help this new population assimilate into America in general, and Holyoke specifically, there were five divisions of the AOH. New Immigrants joined the Hibernians to make social contacts, to get jobs, and to buy life insurance at an affordable price.  In fact, there was an AOH Hall on Front and John Streets in Holyoke (1889-1939), the present location of the Lyman Terrace Apartments.  The AOH would eventually meet at Caledonian Hall at the corner of Appleton and High Streets.  Social events were also held at the Dingle Club. Division One bought a house on Chestnut Street that had been the Registry of Motor Vehicles.  Through some tough economic times, Jim Curran and his committee would meet in his office to conduct the Annual Communion Breakfast and keep the AOH together.

Being civic-minded, Curran helped remodel the JFK Memorial Park in Holyoke with no compensation.  In the case of the Mt. Park Carousel, Jim personally dismantled the merry-go-round and reassembled it in the new location in Heritage Park in downtown Holyoke.  He has unselfishly given his time to assist at the Jericho House, the Holyoke Public Library, Holy Cross Church, and assembles the Christmas Tree outside City Hall each Christmas.

Mr. Curran was named Mr. Hibernian in 1974 by the Ancient Order of Hibernians.  The Chamber of Commerce chose him as “Businessperson of the Year” in 1979.  He was named the “Grand Marshall” of the Holyoke St Patrick’s Parade in 2002.  In 2007, a park was dedicated to him in front of an entrance arch at Holyoke City Hall (Curran Plaza).

Jim is married to the former Joyce McCarthy and the couple has two children: J. Scott Curran and Shawna Ann Frazer.  They are proud grandparents to Matthew Curran Frazer, Eliza Curran, and twins Clare and Jane Frazer.

Bishop Emeritus The Most Reverend Joseph F. Maguire of Springfield shared in poetry in 2002 his thoughts on Jim Curran:

…In the venerable setting of the Wherehouse?
There is history and legend galore.
There is tribute and fond recognition
of dear friends in glad days of yore.

You’re a quiet and a good man, Jim Curran
quite content at the back of the hall.
And that’s why we truly admire you.
the finest, most humble of all….

Jim Curran will probably give his usual speech at the Reception: “Thank You Very Much”. But if you have some place to go afterwards, don’t ask him a question about The Wherehouse?